History of the Hancher-Finkbine Awards

The first annual dinner for representative Iowa men was held February 21st, 1917, with William O. Finkbine, 1878A, 1880L, of Des Moines, and Carl Kuhnle, 1881A, 1882L, of Denison, as hosts. In 1921 the first annual dinner for representative Iowa women, the Good-Will Dinner, was held with Dorothy Finkbine Sauers (daughter of W. O.) and her aunts Emilie and Marie Stapp of Massachusetts as hostesses. In 1972 the dinners were combined and designated the Finkbine Dinner of Representative Students.

The purpose of the dinners was to enable the hosts and hostesses to become acquainted with each generation of campus leaders and for these leaders to know each other, all to the end of cementing firm and lasting ties to the University. So successful did he believe these dinners to be, Mr. Finkbine provided an endowment to perpetuate them. Additional funding is provided through support from the University of Iowa Center for Advancement along with generous alumni and friends.

Mr. Finkbine hoped that the leaders of The University of Iowa’s constituencies: students, faculty, administration, and alumni would, on these occasions, come to have a better understanding of one another’s diverse interests and of their mutual concern for the traditions and vitality of the University. 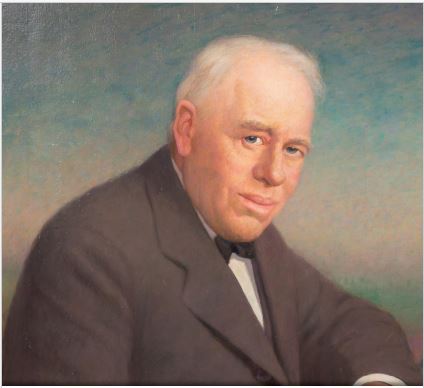 William Orlando Finkbine, known as “Will” to most and as “Billy” to his closest friends and family – the founder of the Finkbine Dinner. Mr. Finkbine earned his bachelor’s degree in 1878 at the University of Iowa, and his law degree two years later. Mr. Finkbine loved this university dearly, and it remained a large part of his life until his death in 1930.

In 1917, he hosted the first dinner for what he called “representative student leaders.” The students he invited (all men) had all been elected by their fellow students to positions of leadership—and so began the Finkbine dinners. Please note this was in an era when the men’s residence halls and the women were “safely” separated by the Iowa River.

Just four years later in 1921, Mr. Finkbine’s daughter, Dorothy Finkbine Sauers, along with two of her aunts, hosted the first of what were known as the Good Will Dinners for women leaders. So, every year, there were two dinners, usually on successive evenings. The formats were much the same, and they were all about recognizing outstanding qualities of leadership.

The History of the Medallion

The tradition of awarding Hancher-Finkbine Medallions was established to recognize leadership, learning, and loyalty. In early 1964, alumni of the dinners were invited by Administrative Dean Allin W, Dakin to contribute to a “Hancher Fund of the Finkbine Men” in honor of Virgil M. Hancher, who had been honored as a student at the first dinner and was about to retire as president of his alma mater.

The task of determining an appropriate use of the fund was assigned to a committee chaired by Clark Houghton, president of the First National Bank, with members such as Dean Dakin; John Haefner professor of education; M. L. Huit, dean of students; and Robert F. Ray, dean of continuing education. On June 25, 1964, this committee recommended to President Hancher:

"… three medallions to be given, one to an outstanding student, one to an outstanding Finkbine alumnus, and one to a University teacher, the last award being based primarily on teaching ability rather than research or writing. These medallions would be done very nicely, with a profile of both you and Mr. Finkbine on the front and the name of the recipient on the back. Also, on the front would be three words: learning, leadership, and loyalty, as well as the name 'State University of Iowa'. On the back, the medallions would read “The Hancher Medallion presented by the Finkbine Men of the State University of Iowa to John Doe” with the appropriate date."

This idea of a medallion was transformed into work a of art through Hands Jewelers under the expert guidance of its president, William G. Nusser, Sr. The original artwork was done by a model maker in New York City, and the image of President Hancher was refined by artist Cloy Kent of Iowa City. (Her portrait of Mr. Hancher now hangs in the green room of the Virgil M. Hancher Auditorium.)

Through the generosity of Hands of Iowa City and The University of Iowa Foundation, medallions are now awarded to four students, a professor, and a member of the alumni family each year. Women and men are equally eligible to receive this symbol of the University’s highest esteem.

100th Anniversary of the Hancher-Finkbine Dinner

In 1972, the Finkbine Dinners and the Good Will Dinners were combined, and since then we have recognized all recipients at the same dinner.