This dinner brings together outstanding individuals to establish meaningful connections that will help them throughout their careers, volunteer experiences, and daily lives.

Founded in 1917 by alumnus William O. Finkbine, the Hancher-Finkbine Dinner is an opportunity for each generation of campus leaders to become acquainted with the event's hosts and with one another.

This annual event honors past and present distinguished students, faculty, staff, and alumni through a series of awards (listed below). The Hancher-Finkbine Medallion, one of the awards presented at the Dinner, is an opportunity for members of the University community to recognize their peers for exemplary dedication in leadership, learning, and loyalty. These awards, the most prestigious at the University of Iowa, seek to recognize individuals of extraordinary ability and potential.

Learn more about the history of the Hancher-Finkbine Dinner and awards.

Awards Presented at the Hancher-Finkbine Dinner 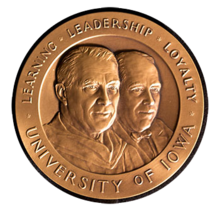 Through the generosity of Hands of Iowa City and The University of Iowa Foundation, medallions are now awarded to four students, a professor, and a member of the alumni family each year. Women and men are equally eligible to receive this symbol of the University’s highest esteem.

The Distinguished Student Leader Awards are selected by the Hancher-Finkbine Dinner Committee to recognize students who have exhibited meritorious qualities in learning, leadership and loyalty. Recipients are nominated by student organizations and collegiate deans. Established in 1980, recipients include both undergraduate and graduate students. 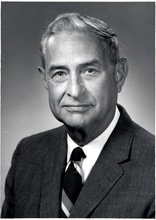 The Marion L. Huit Faculty Award was established in 1978 to recognize M. L. Huit's outstanding dedication and service to students of The University of Iowa during his tenure as dean of students. The award is presented annually to a faculty member who best characterizes M. L. Huit's contributions to University and community life. Dean Huit exemplified the qualities of dedication to, concern for, and interaction with students.

Nominations may be submitted by anyone in the University of Iowa community. Collaboration between students and faculty is encouraged in the nomination process. 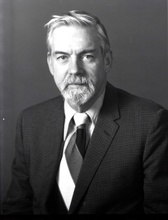 The James N. Murray Award was established by the Beta Iota Circle of Omicron Delta Kappa in 1985 in honor of the late James N. Murray, UI professor and past chair of the Department of Political Science. Professor Murray was also an ODK alum. The Murray Award is designed to honor an untenured faculty member, typically a younger scholar with less than six years of UI service, who has demonstrated outstanding rapport with students and who creates an exemplary classroom atmosphere.

Nominations may be submitted by anyone in the University of Iowa community. Collaboration between students and faculty is encouraged in the nomination process.